Cirencester is a large town (not a city) in the Gloucestershire Cotswolds, with a population of around 19,000.

The town is often referred to as the capital of the Cotswolds and has a long history, stretching back to Roman times. In those days, the town was known as Corinium and was the second largest in Roman Britain.

Cirencester is a busy market town & stands on the site of Corinium Dobunnorum at the crossing of three major Roman Roads – Ermine Way; The Fosse Way; Akeman Street.

Founded in about AD75 & planned on a grid of straight lines the town has seen many archaeological excavations with a number of the finds on view at the Corinium Museum  in Park Street.

Located 90 miles west (and slightly north) of London, to the south east of Cheltenham and Gloucester, and the north east of Tetbury, Cirencester is a very historic part of Britain and is a great place to learn about British history and architecture.

This Roman city will provide you with a fantastic travel experience.

Cirencester, the capital of the Cotswolds, has been around since the days of Alexander the Great and during the Roman Empire it was the largest city in England next to London.

The city is filled with amazing architecture like the church of St. John the Baptist, parts of which date back to 1115. 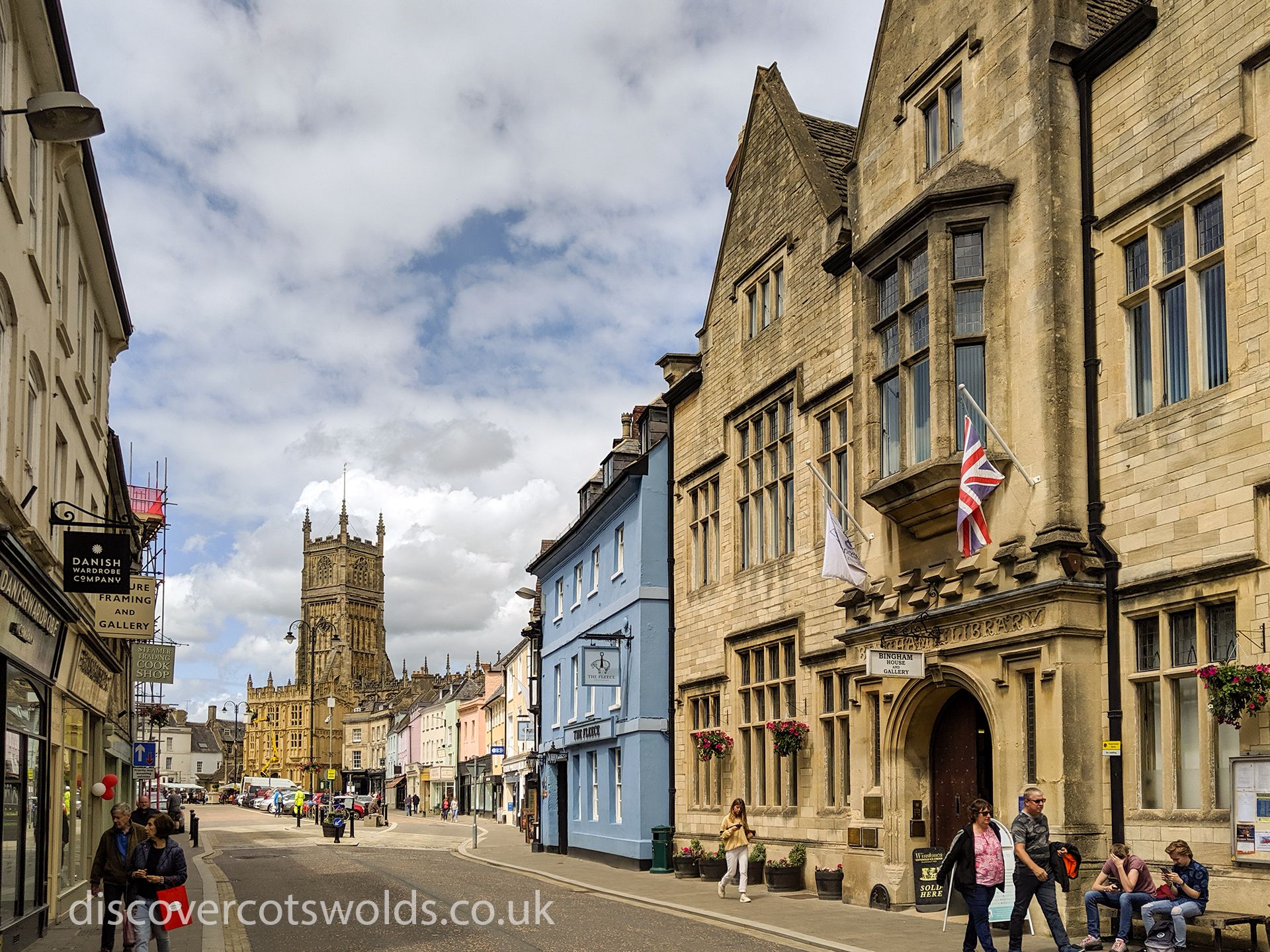 The photo above shows the church of St. John the Baptist, Cirencester, looming over the market square.

Cirencester has a number of great attractions for you to enjoy including Cirencester Park with its lush geometric landscaping, the Cirencester Street Market and several walking tours that highlight the amazing landscape around the city.

There is still evidence of a Roman amphitheatre in Cirencester, although it has only been partially excavated.

The Gloucestershire Way walking tour features a 100 mile walk through the Cotswolds countryside. The walking tours are a great environment for taking photographs and just enjoying the fresh air.

Other attractions in the Cotswolds area of outstanding natural beauty include

On passing through the main door of the Corinium Museum in Cirencester, visitors are transported back in history to arrive in Roman Britain and it’s second largest city, Corinium.

Here modern day visitors can experience a life as a Roman, see some of the stunning mosaics discovered throughout the town and look through windows into the rooms of a Roman Villa.

Once through the Roman galleries you will come face to face with the Anglo-Saxons, from Butler’s Field, Lechlade. An Anglo-Saxon gallery has been created to show the treasures discovered from the cemetery uncovered at Butler’s Field.

The Corinium Museum features many great artefacts that go back to the prehistoric days as well as exhibits from the Roman Empire that range from tombstones and mosaics to sculptures, artwork and more.

There are also relics and artefacts that have been unearthed by archaeologists around the area and examples of Victorian lifestyle during the 1800′s. The museum is open every day during various hours and an entrance fee is charged for admission. 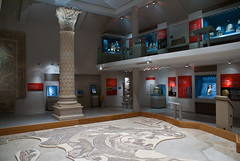 The photo above shows a view of the Corinium Museum, Cirencester.

The Bristol Aero Museum in Cirencester features a number of aircraft exhibits from the Bristol Aeroplane Company as well as displays of British Aircraft, missiles and aircraft engines.

The Bristol Aero Museum also features several events throughout the year that display the company’s business practices and industry projects.

Cirencester also features many activities such as ballooning, cycling, horse riding, golf, fishing and more. There are also a number of artistic classes like pottery, wood turning and furniture restoration classes that you can take to learn various crafts.

The Cotswolds are known for great shops and arts and crafts heritage, where you can find British antiques and many art galleries that showcase the artists around Cirencester and the Cotswolds.

Leave the Market Place via Castle Street passing the Post Office and turning into Silver Street and then into Park Street to pass the Corinium Museum on the right. The museum houses some beautiful Roman remains including several mosaic pavements including the Orpheus Pavement found at nearby Barton Farm.

Opposite the museum a good view of the huge yew hedge can be seen. This is reputed to be the tallest in the world and form’s part of the boundary of Cirencester Park

Continue past the museum turning left entering Cecily Hill, the guide books say that this area is the limit of the Roman town. Many of the houses lining the street are of the 18th and 19th centuries. The Barracks at the top of the hill, built in 1857 was the HQ for the Royal North Gloucestershire Militia. Although the street is a cul de sac the gates at the end allow entry to the Broad Drive of which the Earl Bathurst gives permission to access the Park.

Return along Cecily Hill and turn left to enter Thomas Street and then right into Coxwell Street. Properties along here saw action in 1642 during the English Civil War.

Turn left into Dollar Street, named after the Dole Hall of the Abbey. A property on the left has two rather splendid statues high above the ground decorating the frontage. Take the second turning on the left, just past the bakers and continue along the passageway to Thomas Street, turn right and continue along the street passing the former Friends Meeting House and the restored Temperance Hall, used by the Salvation Army. Further on the left is the oldest building in the town, the Almshouses of St Thomas’s Hospital founded in 1483.

Cross over Dollar Street and turn right into Spitalgate Lane. On the left is St Johns Hospital and Chantry founded by Henry II and the Almshouses next door. Continue for a short distance along Spitalgate Lane turning right into Dugdale Road to enter the Abbey Grounds.

The only standing part of the former Abbey, a Norman Arch, built in the 12th century is a few yards to the left of the pathway. Continue along the pathway towards the parish church passing the site of the Abbey Church of St Mary marked out on the lawns by pathing. Turn left and follow the pathway through the park over a small footbridge to see the remaining Roman town Wall.

Leave the park over the footbridge and left into Corinium Gate and continue to the main road. Turn right and at the traffic lights turn left to follow Victoria Road. Continue along Victoria Road to Chester Street on the right. Turn along here. Properties along the street hide Roman remains and a mosaic was discovered by Channel 4’s Time Team during excavations here in 1999.

Turn left at the end of the road and left into St Michaels Park. Continue through the park with a good view of the parish church of Watermoor. On leaving the park note Bingham Hall before turning right to reach Watermoor Road.

Turn right to go along Watermoor Road and turning right into The Avenue. Turn left to reach the crossing of Ermine Way and the Fosse Way and enter South Way and the Forum area of the Roman town. Continue past the police station and the Bear Hotel turning left into the Market Place and return to the parish church.

The nearest train station is in Kemble, approximately 15 minutes drive to the south.

Bristol airport is around 60 miles away to the south west and Oxford airport 35 miles to the east.

There are several cottages, hotels and bed and breakfasts in the area for you to stay at.

If you enjoy camping, there are some camp grounds nearby that offer spaces for tents as well as caravans. There are also several car rental agencies in the area that can provide you with a vehicle to get you around the area.

When you are looking for great holiday ideas for a getaway, check out Cirencester, in the Cotswolds, United Kingdom.