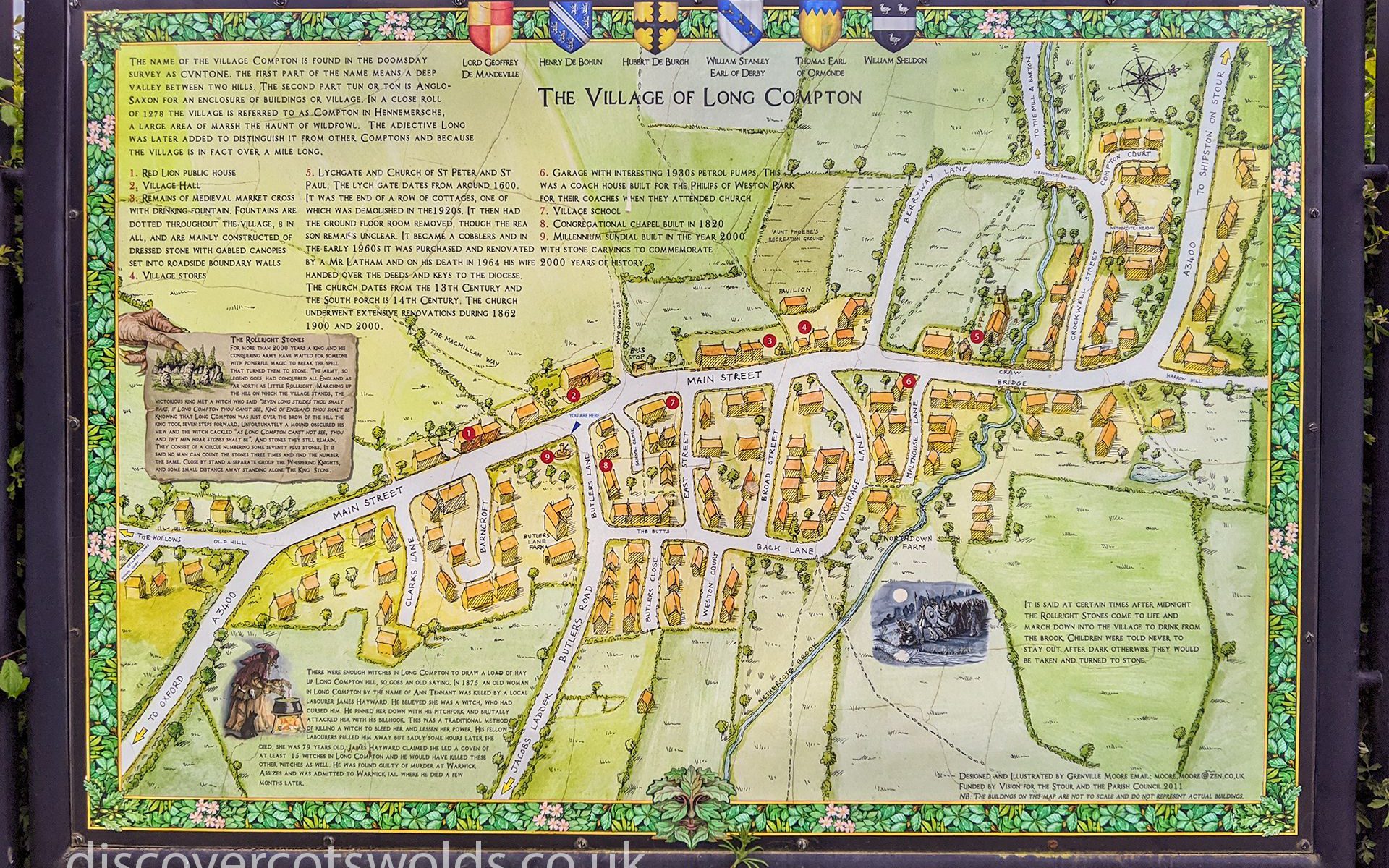 Long Compton is a small village (population around 750 residents) in the Warwickshire Cotswolds.

It’s nestled at the bottom of a valley, close to the border with Oxfordshire and about 5 miles to the north of the market town of Chipping Norton.

The Neolithic Rollright stones are also walking distance from the village, albeit up a rather steep hill.

What’s in a name?

The village dates back to Saxon times and the origins of the name Compton meant a village or enclosure of buildings at the bottom of a deep valley between two hills.

The long part was added later to distinguish the village from other, nearby Comptons (eg Little Compton). The village is over a mile long from end to end, so it makes perfect sense.

This picturesque village is on the main route between Oxford and Stratford upon Avon and as such, many passers by will be familiar with one the most unusual and striking features of Long Compton.

The Long Compton lych gate stands at the entrance to the large parish church of St Peter and St Paul.

Lych gates aren’t usually quite as substantial as this one. Traditionally they were roofed gateways to church yards, used for sheltering the coffin at the beginning of a funeral.

This unusual looking building dates back to the 17th century. It was once at the end of a row of terraced cottages, which have long since been demolished.

Privately owned until the 1960s when it was given to the church and the ground floor removed.

Over the years it has been a shop, a dwelling, it is now used by the local historical society. It must have made for quite a cosy, if cramped abode. Compact and bijou anyone?

This Grade II listed, former coaching inn dating from 1748 offers food and rest for the weary traveller, including dog friendly accommodation. A bonus if you are taking your four legged friend on a trip with you.

Get information on availability and making a booking here.

Other than that, there is an assortment of holiday cottages and bed and breakfast accommodation dotted throughout the village.

As mentioned earlier, Long Compton is on the main route between Stratford upon Avon and Oxford. As such, getting here by car or other motorised transport is quite easy.

There is no train station in the village, the nearest one is in Moreton in Marsh, which is about a 15 minute drive away. There are however, regular bus services to the village.

As with many Cotswolds towns and villages, the church is a large and prominent feature.

It’s said to be the only building in the village to have survived the English Civil War and parts of it date back to the 13th Century.

There is reputed to have been a church on the site as far back as the 5th Century that was visited by St Augustine but sadly there is no evidence to support these legends.

The rest of the buildings in the village date from the 17th century and later and Long Compton has its fair share of traditional looking stone cottages as well as more recent additions.

Unlike many of the larger or more visited Cotswolds villages, there are no public conveniences in Long Compton.