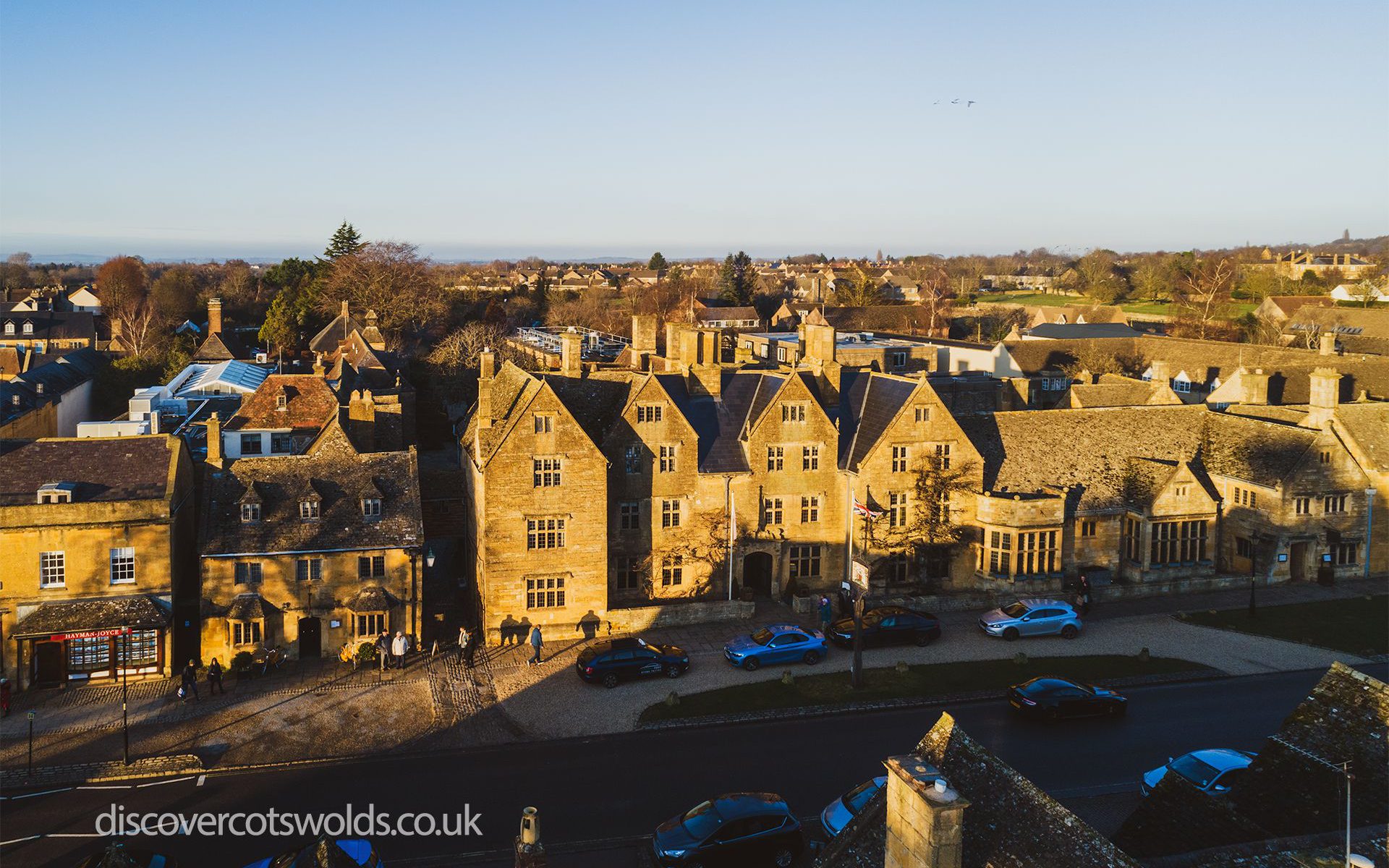 Broadway is a large village in the Worcestershire Cotswolds, with a population of around 2500. Situated half way between Moreton in Marsh and Evesham, it’s nestled at the foot of nearby Fish Hill.

The phrase ‘quintessentially British’ was never more true than when applied to this beautiful corner of the Cotswolds. Honey coloured ‘chocolate-box’ stone cottages and red chestnut trees line the streets of this historic village, one of the most picturesque  of the Cotswold’s attractions.

A stroll down Broadway’s High Street is like going back in time, and it’s easy to understand why so many international visitors find themselves enticed here.

The village of Broadway is often referred to as the ‘Jewel of the Cotswolds’ and remains one of the most sought after areas around, both for visitors and for those looking for a permanent home.

Take a look around the village with this aerial 360 photo: 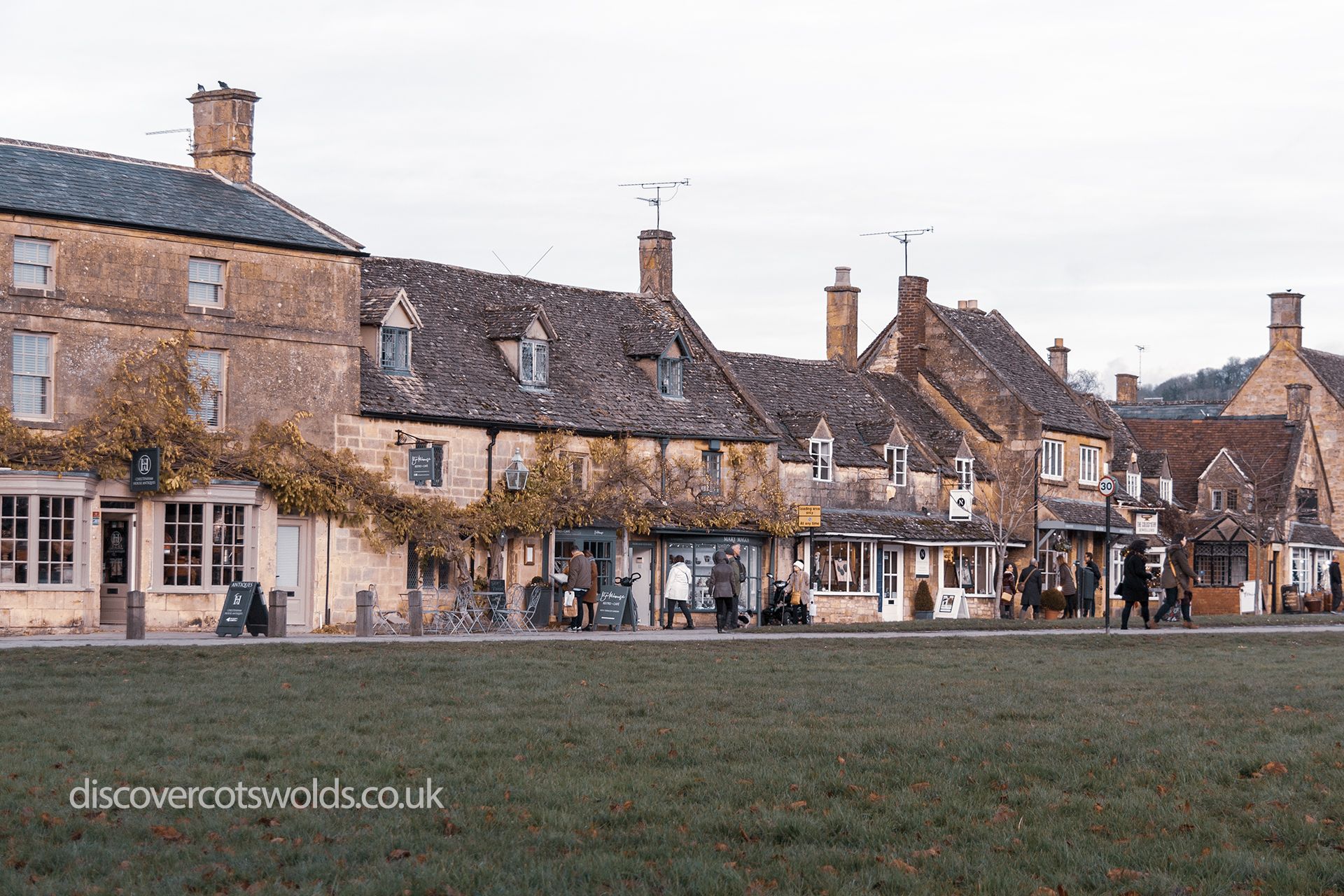 Many visitors will approach Broadway village via Fish Hill, a 2.5km stretch that lies to the east, so named because, as the stories go, monks living there used to cultivate fish in ponds.

This winding stretch of the A4 is also a great place to take in a great view over the Cotswolds (like the photo on the front page of our website).

Within easy reach of places like Stratford upon Avon, with its rich Shakespearean history, or Warwick with one of the finest medieval castles in England, and just a two hour drive from central London, Broadway is a must if you’re putting together a Cotswold bucket list.

Much of Broadway’s charm is due to its particularly wide (for an English village) high street and the gorgeous mix of Tudor and Georgian period buildings.

With its quiet and relaxed atmosphere the village is a picture perfect setting for a UK getaway. Take the time while you’re there to visit the vast array of shops, cafes and restaurants.

From galleries to pet-supplies, there’s something for everyone, and you’ll be met with a smile by every one of the independent business owners you meet.

Okay, so you’ve decided you’re heading for Broadway. Whilst the beauty of the village is certainly a big attraction, it is not the only draw for tourists who arrive each and every month. Let us help you make the most of the surrounding area.

Situated at the second highest point in the Cotswolds and overlooking the village of Broadway is Broadway Tower. A 30 minute walk or a 5-6 minute drive will get you there.

Built by the Earl of Coventry in the 18th Century, the Tower might only be 65 feet tall, but it’s easily the best way to take in spectacular 360 views of 12 English counties from its perch on top of the second highest point in the Cotswolds.

Read more about it in our dedicated Broadway Tower page here.

This area is a walker’s paradise.  The centre of Broadway is just a few minutes away from the Cotswolds Way Trail and home to several incredible routes around Broadway that allow you to get out and explore the beautiful English countryside.

Take a wonder through the bluebell woods to the quiet village of Buckland; a ramble to the historic market town of Chipping Campden or a jaunt to the old church of St. Eadburgh’s.

Whichever route you choose, you’ll love being immersed in the rural tranquillity of the Cotswolds countryside.

Broadway has an abundance of artistic heritage, with the village at the very heart of creative inspiration for a number of writers and artists including:

With such a rich history, it’s not surprising that the village is now home to a number of the country’s best art galleries including:

The High Street provides all the clues you need to know how the village got its name. The broad street gives ample room to wander and take it all in. If you’re looking for a scenic spot to eat lunch or grab a coffee, you’ll find an abundance of high quality restaurants, cafes and bars, with more than enough choice for even the pickiest eater.

Perfect for those wanting to indulge in a little retail therapy, Broadway’s gift shops, clothing stores and wide range of high quality antique shops have got all of your shopping needs covered.

Why stop at a day trip? There’s plenty in Broadway and the surrounding area to keep you busy, so why not stay a while?

There are hotels and B&Bs aplenty in Broadway. The famous Lygon Arms Hotel, something of a Cotswolds institution, dates back to the 1300s.

Known by many as the home to royals including King Charles I, King Edward VIII, guests are able to sleep in the room that Oliver Cromwell spent the night before the Battle of Worcester, so if you’re looking for a little traditional luxury, this might just be the place for you.

The historic Cotswolds village of Broadway is a truly memorable place to visit and stay and acts as the ideal base from which to explore the surrounding areas. The spectacular scenery may lure both national and international visitors each and every year, however Broadway really does have the whole package with a range of high quality gift and antique stores, luxurious restaurants, cafes and tea-rooms as well as fantastic hotels and B&B’s. When it comes to UK getaways, it really doesn’t get better than this – the ‘Jewel of the Cotswolds’ truly is a treasure of the English countryside.

P.S Due to Broadway’s strong and historic art connections, the village hosts a fantastic biennial Arts Festival with live music, exhibitions, events and lectures which is fun for groups of every age. If you are interested in attending this event, make sure you get the date in your diary for next year because it’s definitely an event for art lovers not to miss!