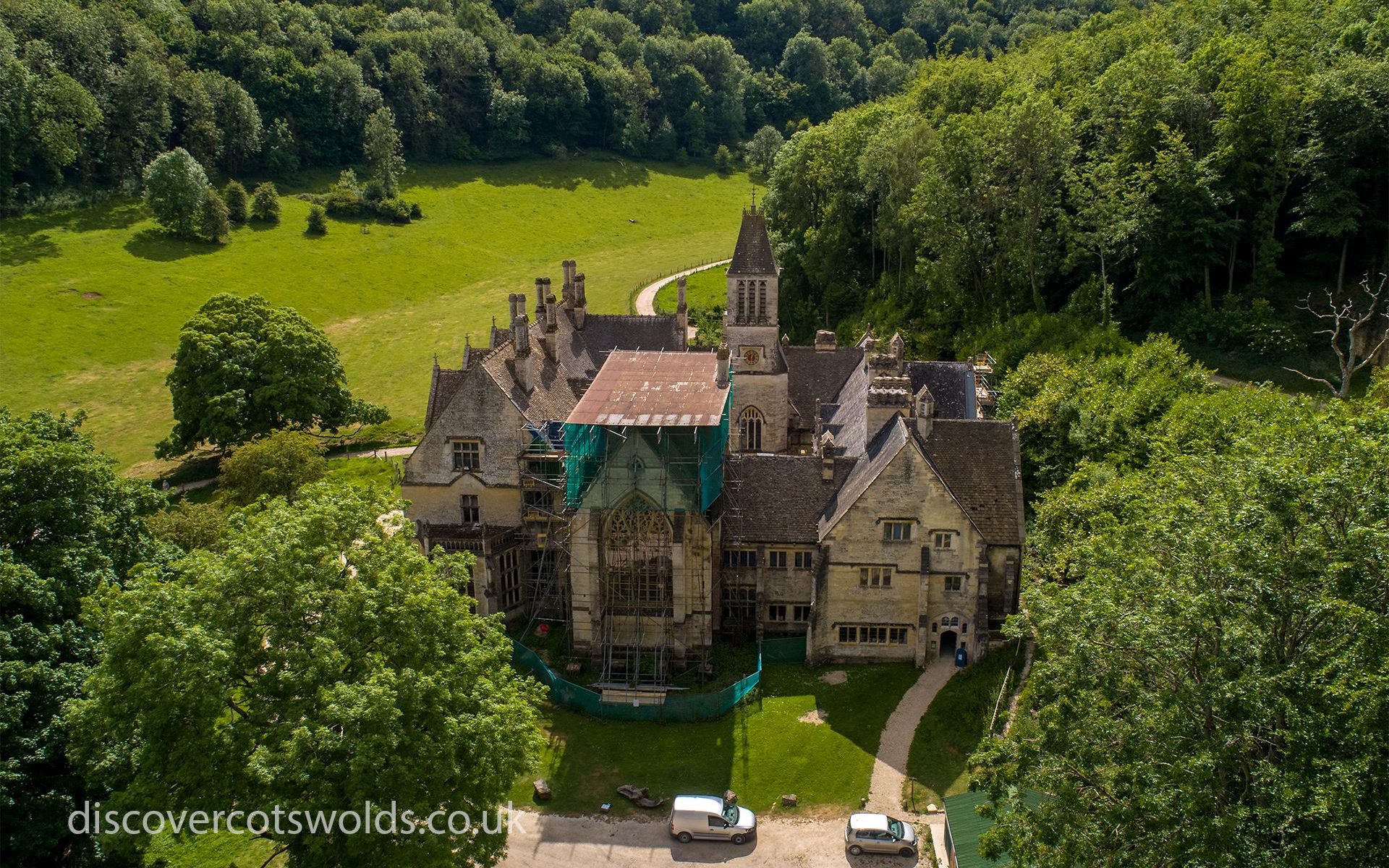 Nestled away in a Gloucestershire valley is an unoccupied mansion house, surrounded by country park and what were once expansive grounds.

At first glance, this Cotswolds mansion appears to be a grand gothic manor house. However there is more to it than meets the eye.

Now a Grade I listed building, and an SSSI (site of special scientific interest) thanks to nesting greater and lesser horseshoe bats, this building has a fascinating and chequered history.

Firstly, the Mansion is nowhere near as old as it might appear. Although it was built on the site of an older house, construction work didn’t start on the current incarnation of the Mansion until 1858.

However, the Gothic revival style that some of the Mansion is built in makes it appear much older.

Secondly, the Mansion is an unfinished masterpiece. Building work halted on the building in the early 1870s and it has remained uncompleted ever since.

Its owner William Leigh died in 1873 and his grand vision for his mansion died with him.

His surviving family commissioned a different architect to complete the design of the Mansion.

The response was that not only would it be expensive to complete and then maintain the Mansion but that it would also be far more effective to build another residence within Woodchester Park (the grounds surrounding the Mansion) and abandon the Mansion altogether.

However, the family quickly realised that they could neither afford to start entirely from scratch, nor to complete construction of the Mansion as it was, especially as the cost of running the mansion would come to roughly double their annual income.

The family ended up extending the grounds keeper’s cottage where they had been living and that became their family home instead.

Over the years parts of the estate were gradually sold off, leaving the family with less land and less income. At times plans were made to finish the Mansion but these were never realised.

In the 1930s Woodchester Mansion was sold to Barnwood House Hospital, who intended to use the Mansion itself as offices and create new buildings for their patients.

During the Second World War, the valley was used for training soldiers, who were based in the park surrounding the mansion.

It was understandably a high security area and visitors were not permitted. This policy continued even after the war was over. The plans for the hospital never came to fruition and in 1953 the property was sold again.

Although the Mansion was not complete, it was maintained up until the mid 1970s, after which time it fell into neglect and suffered from the effects of the weather.

The chapel in particular seems to have suffered the brunt of this and is now supported by scaffolding and protected by a covering over the roof whilst it awaits restoration.

Unusually for a residence this grand and stately, it is tucked away, out of sight, at the bottom of a valley. Its somewhat hidden location has possibly contributed to the Mansion surviving relatively intact, safe from vandals and developers over the decades.

You can read a far more detailed history of the Mansion on the Trust’s website.

The Mansion was first listed in 1960 and is now a Grade I listed building.

The surrounding park land, Woodchester Park (which is owned and managed separately by the National Trust) is Grade II listed and was listed in 1986.

The Cottage, where the Leigh family lived for most of their time on the estate, is also Grade II listed and was listed in 1988.

In 1988 the Mansion and 23 acres of surrounding land was purchased by Stroud District Council.

The following year the Woodchester Mansion Trust was formed to help protect and preserve the mansion. It’s patron is HRH Prince Charles.

Because of its status as a listed building, the Mansion can never be completed and will forever remain unfinished. However, the trust aim to repair the building back to the state that it was in when construction finished, back in 1870.

The Mansion is used as a training centre for various heritage crafts, such as stone masons, to hone their skills, as well as architects, surveyors and other related professions.

In addition to this the Mansion is open to the public (Covid-19 restrictions not withstanding) from the beginning of April until the end October every year, on:

The unfinished nature of the Mansion gives visitors a unique insight into how buildings like this were constructed. You can quite literally see underneath the skin of this building.

Old historic manor houses and mansions in their completed state are fascinating and impressive but to get the opportunity to experience one that never quite made it to completion is like being able to travel back through time.

You can even see the original tools that were used by the stone masons working here back in the 19th Century, before the project was abandoned.

How to get here

The Mansion is located in Gloucestershire, near the small village of Nympsfield.

Most haunted building in England?

Rumours abound that the Mansion is haunted and some say that this is why it was never completed. Perhaps the site is cursed?

While there is no way for us to confirm this, misfortune does appear to have accompanied the Mansion right from the beginning and we certainly wouldn’t want to spend a night within its walls.

Over the years, a number of TV programmes have focussed on this aspect of the Mansion’s history.

As well as programmes like Most Haunted and Ghost Hunters, the Mansion has also featured in nature documentaries as well as being used as a location in productions like the Crown, His Dark Materials and Dracula, to name but a few.